Mysore – Places to Visit with Kids

Mysore or Mysuru (as it is officially known), the cultural capital of Karnataka has got its name from ‘Mahishuru’ which means Mahishasur’s village. There is a very interesting folklore about Mysore that Goddess Parvathi took birth as Chamundeshwari and killed the demon king Mahishasur on top of the Chamundi hill for his misdeeds.

Most of us know Mysore for its famous Dusherra festival, which attracts thousands of tourists from India and abroad. People come here to watch the grand splendor of its 10-day long festivities.

Also, Mysore is known for Mysore palace and the rule of Tipu Sultan.

However, this city has many more colorful feathers in its hat! In addition to being a great vacation spot, Mysore has so much to offer kids in terms of improving their knowledge quotient too! Here’s our low-down of child-friendly Mysore attractions.

Things to do in Mysore with Kids 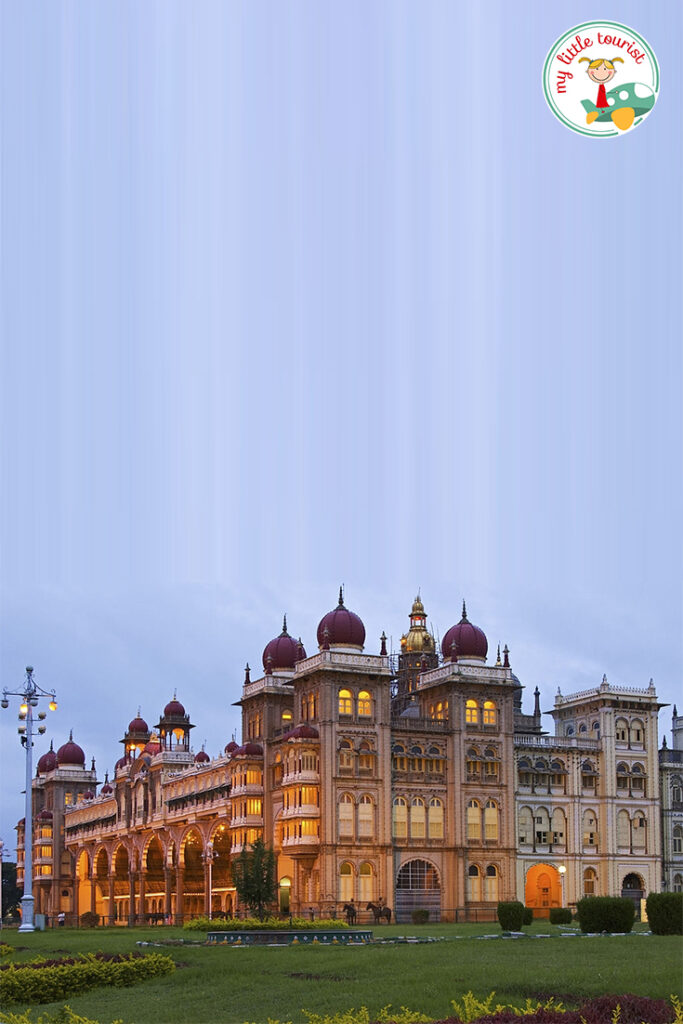 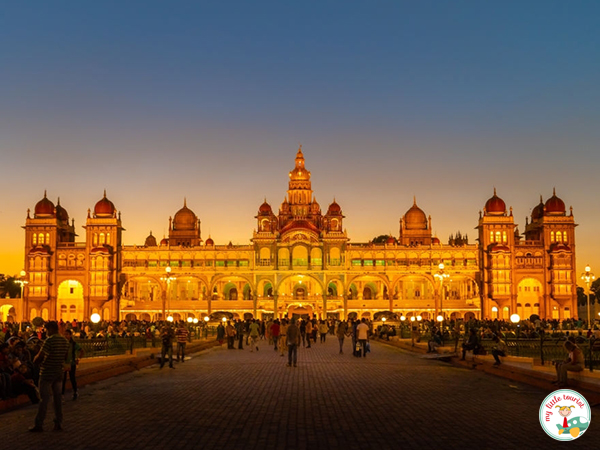 Also known as Amba Vilas Palace, it is situated in the center of the city. It was the official residence of the royal family of Mysore, in fact, a small portion of the palace is still occupied by them.

Mysore Palace is an architectural marvel constructed in 1912 by a British architect Lord Henry Irwin after the old palace got burnt down. The architectural style is a blend of the Hindu, Mughal, Rajput, and Gothic styles. It is a three-storey stone structure with marble domes and has a 145-foot five-storey tower. Surrounded by a large garden, the palace faces the Chamundi hills. 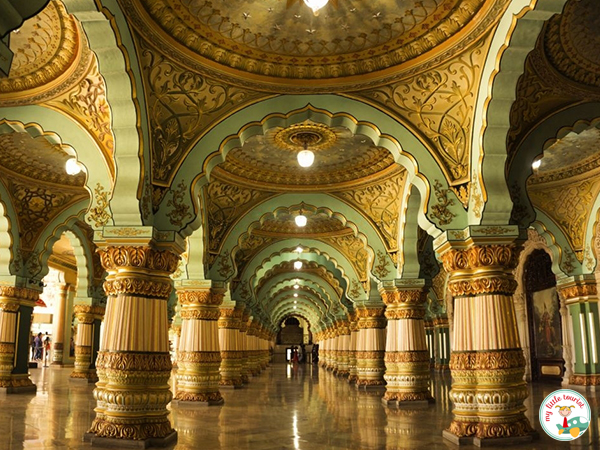 You can take a trip through the entire palace and get immersed in its magnificence. The chiseled wooden door, ornate rooms, mahogany and stained glass ceilings and chandeliers with fine floral motifs take you back to a long-forgotten era. There is a display of royal dresses, musical instruments, weapons and many precious artifacts used by the Wodeyar family. Doll’s Pavilion or ‘GombeThotti’ is a unique place which has a collection of traditional dolls from 19th and early 20th century. For art lovers, there is a Portrait Gallery, which has various paintings of the royal Wodeyar family. There are 8 temples inside the fort dedicated to different Gods and saints.

The world famous Mysore Dusshera Festival is held at the Mysore Palace. During this period the entire palace is lit up for two months with around 96,000 lights.

Another good time to visit this place is at night on Sundays and public holidays, from 7 PM to 7.45 PM, when the palace is illuminated.

Visit timing: Mysore Palace timings are 10 AM to 5.30 PM on all days

Sound and light show: 7 PM to 7.40 PM on all days except Sundays and national holidays

Situated: In the center of the city

Other Palaces in Mysore to visit with kids: 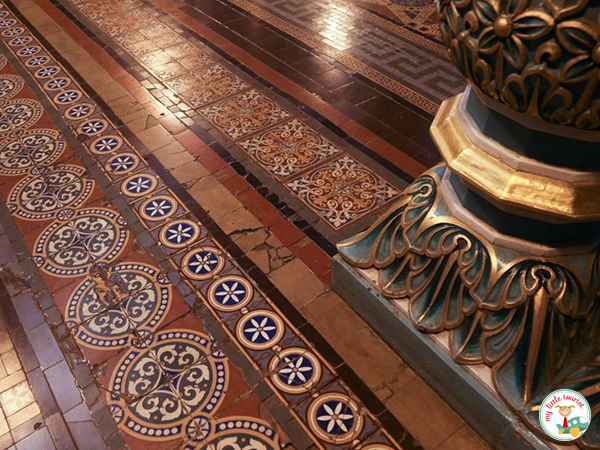 Situated within the campus of the University of Mysore, the palace is on a hillock on the west side of Kukkarahalli Lake. There is a Folklore Museum in the palace which displays a wide range of artifacts related to folk art and culture of Karnataka.

Visit timing: 10 AM to 1 PM and 3 PM to 5 PM (except Monday, second Saturday and government holidays) 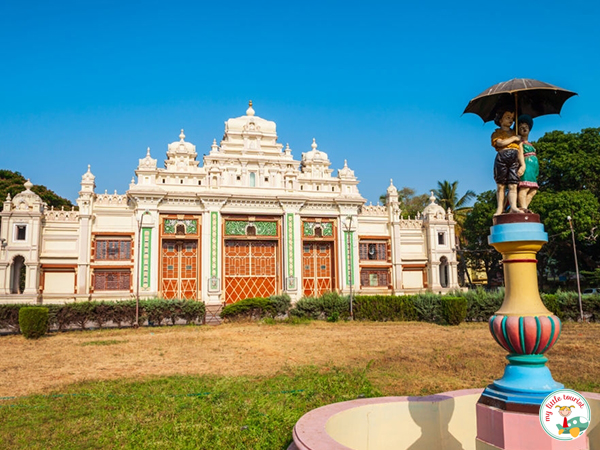 It is famous for the Art Gallery which has a rich collection of paintings by various famous artists.

It’s 4 to 5 minutes away from Mysore palace 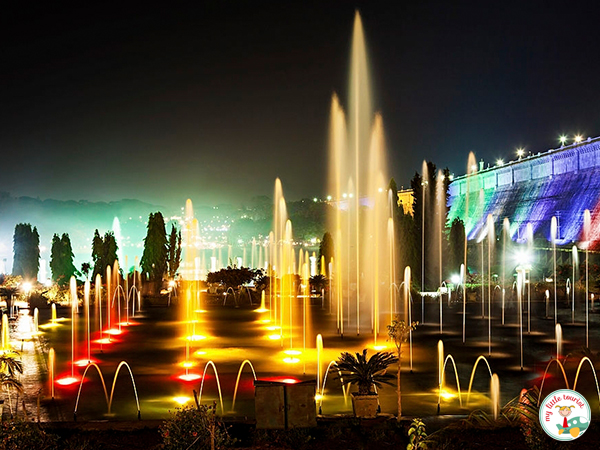 Located next to Krishna Raja Sagar dam is the Brindavan garden which is famous for its terrace gardens, lush green lawns, beautiful flower beds, fountains, and water channels. The garden is spread across 60 acres with a well-built road and pathways. It was modeled in the style of Shalimar Gardens of Kashmir.

The main gate area is inspired by India Gate at New Delhi. The main attraction for tourists, especially kids, is the laser light and musical fountain show in the evening where you can watch water fountains changing color in rhythm to soulful music and watch the illuminated running water. The whole experience looks like a synchronized ballet performance.

In the evening the entire garden is lit up and looks magical!

My daughter enjoyed the musical fountains a lot. This was the first time she was witnessing something like this, live!
Brindavan Garden also has a boating facility offered by the Karnataka State Tourism Development Corporation. 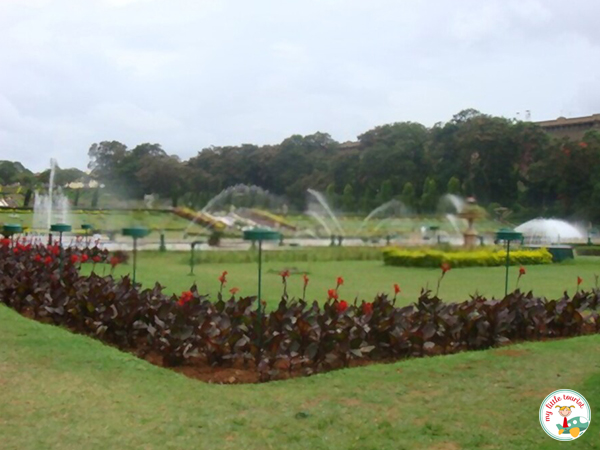 There is a Children’s Park within Brindavan Garden which has slides, concrete animals & birds and other things for kids to play with. 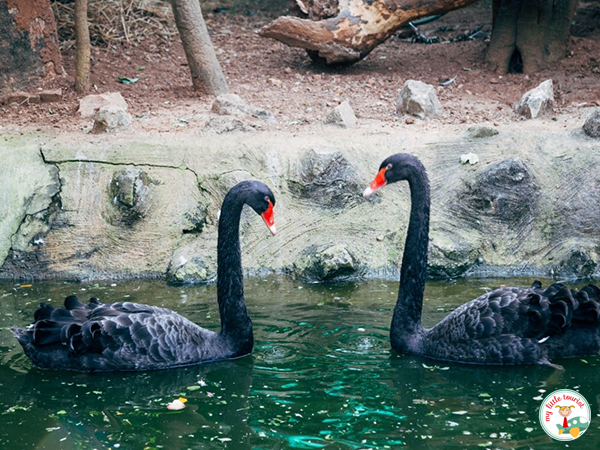 Shri Chamarajendra Zoological Gardens at Mysore also known as Mysore zoo was established in 1892 for the royal family of Mysore. This well maintained zoo is home to different varieties of animals and flowers, including some rare animal species. 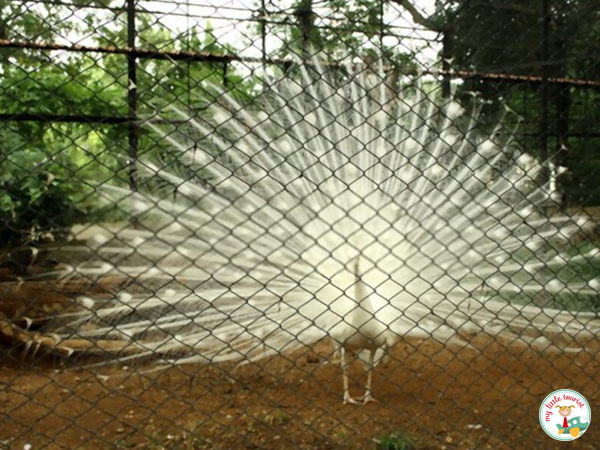 All those animals that you would have shown your little child in their books or videos can be seen in reality here. There are giraffes, lions, hippos, zebras, baboons, cheetahs, white tigers and many more animals.

There are reptiles like python, alligators, crocodiles, cobras and King Cobra.

You can go on a safari in a battery operated car, which is very convenient for kids and elderly people. 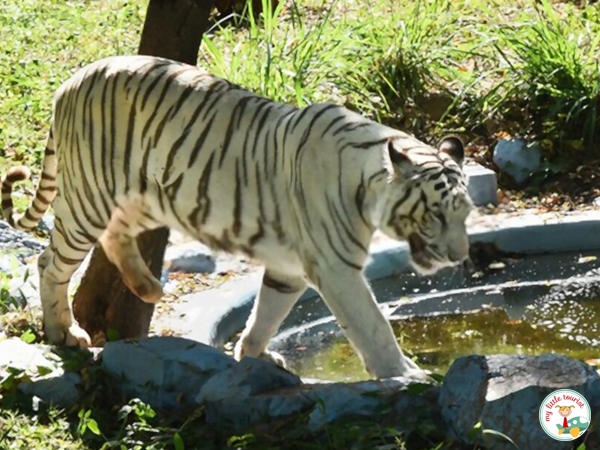 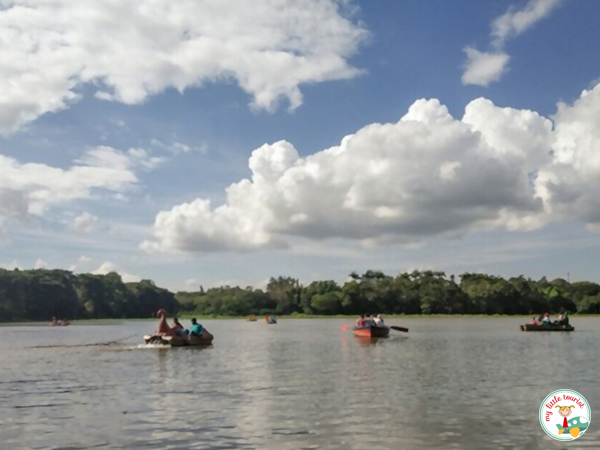 This lake is a part of Mysore zoo and is known for its beautiful aviary (big enclosure for birds) which is the largest in the country. It also has a butterfly park with more than 45 species of these butterflies.

They have special children’s corner and boating facility too.

While you visit the zoo and the lake, ensure that you carry lots of water, as children tend to get thirsty soon while walking and running around. 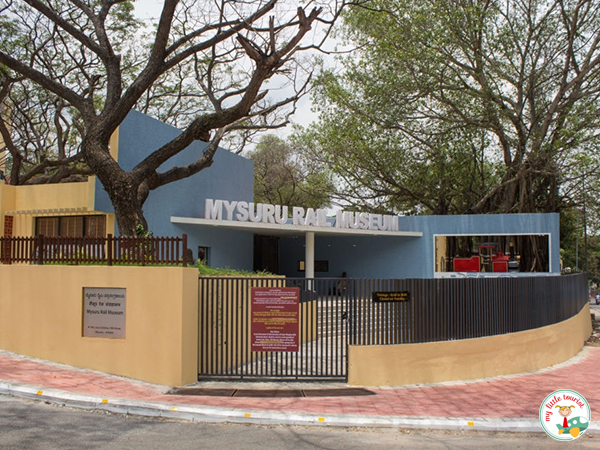 Children as fascinated by trains and engines, making a visit to the Mysore rail museum a fun outing for them.

This Railway Museum established in 1979 by Indian Railways is the second such museum after the National Railway Museum in Delhi. It has a good collection of vintage trains and a gallery of photographs and paintings depicting the growth of railways in India. The first steam engine along with the first signals is exhibited here. It has two royal coaches which display the opulence in which the royal family traveled in those days.

The museum has a battery-operated mini toy train that kids can take a ride on. 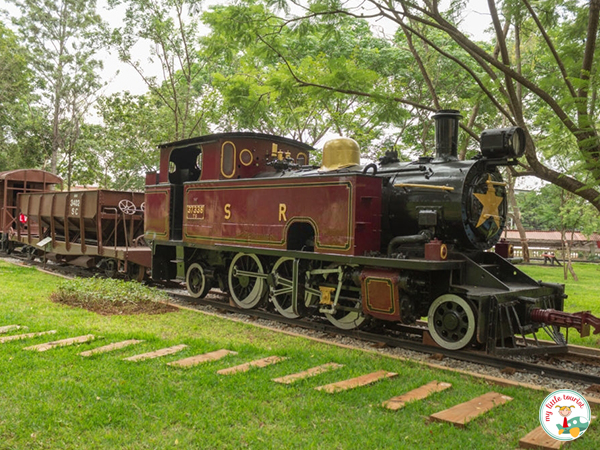 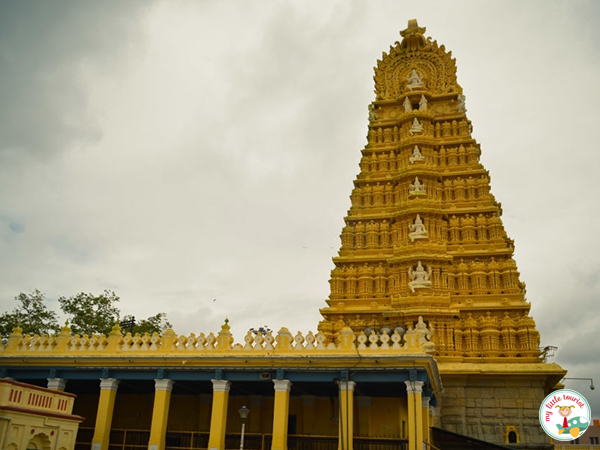 Situated at a height of 1065 meters above sea level and 800 feet above Mysore city on Chamundi hills, this magnificent temple gives you a wonderful view of the whole city. It is known for its architecture and historical significance.

You can reach the temple either through the valley road or by climbing 1000 steps from the foot of the hills. This temple was of great importance to the royal family of Mysore, in fact, the Mysore palace faces the Chamundi hills.

For visitors, this place offers a perfect combination of devotion, serenity, a feel of the royal architecture and exuberance. 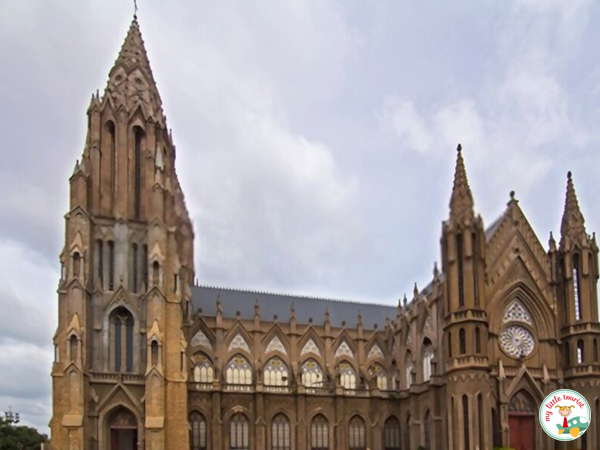 This majestic church known for its architectural brilliance and religious significance was constructed in 1840 and remodeled in 1933 by Mysore King Mummadi Krishna Raja Wodeyar.

The main attractions of the church are its twin spires. These spires are 175 feet in height and resemble the spires of the Cologne Cathedral and also those of St. Patrick’s Church in New York City. The relic of Saint Philomena is preserved in the church. 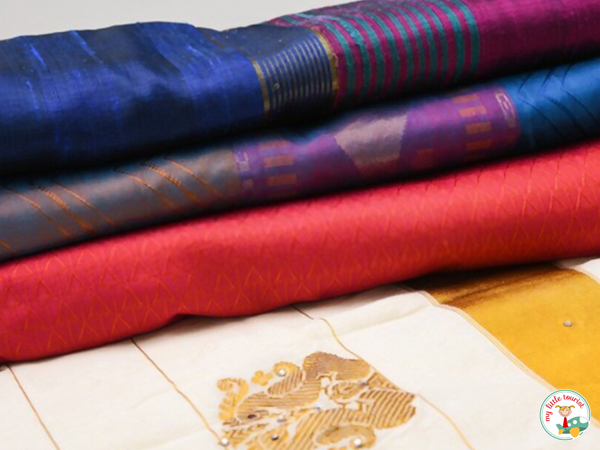 Your Mysore trip would be incomplete without picking something in silk and sandalwood. 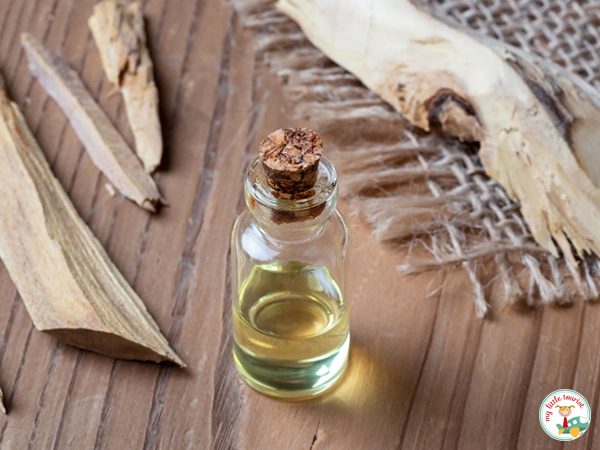 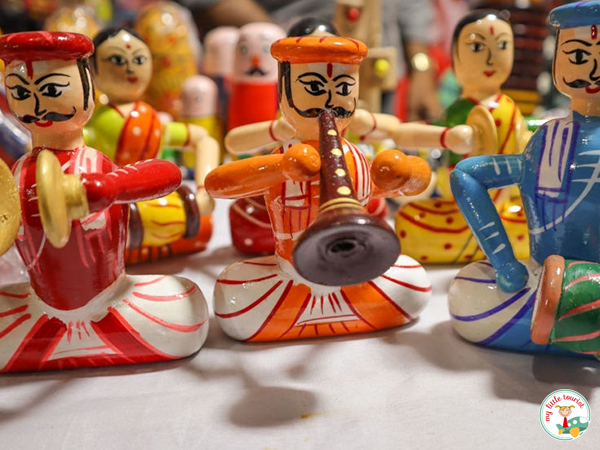 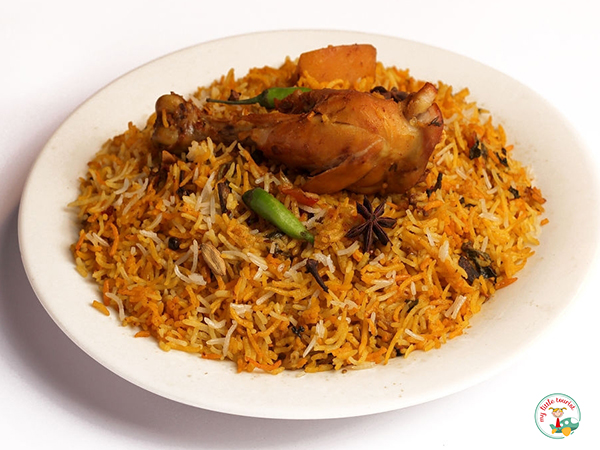 Mysore is well known for its traditional South Indian cuisine. Some of the joints which you should try on your Mysore holiday with kids are:

Best places to stay in Mysore: 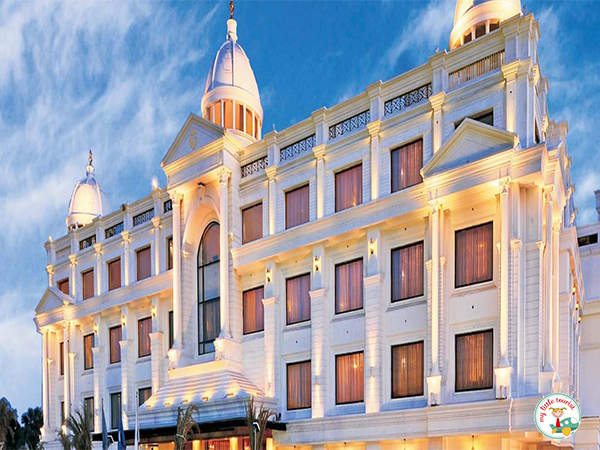 Being a famous tourist spot, Mysore provides you with a lot of choices in accommodation. These are some of the best hotels in Mysore for family: 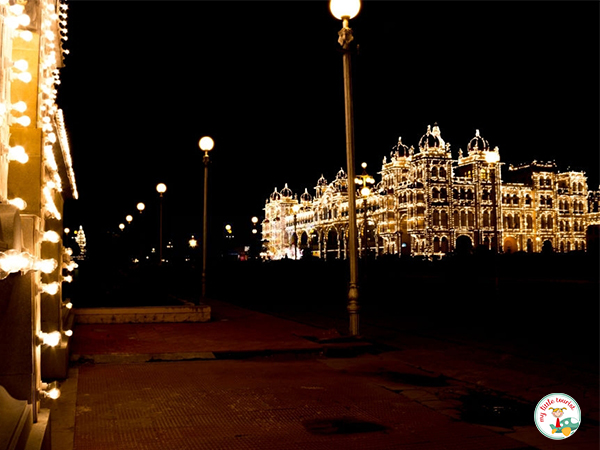 Weather in Mysore is pleasant throughout the year. It ranges between 20 to 25 degree Celsius. Summers tend to get a little warm between 22 to 30 degrees Celsius, however evenings are cool.

In winter you can carry some light woolen clothes for kids, as sometimes the temperature drops below 10 degree Celsius. 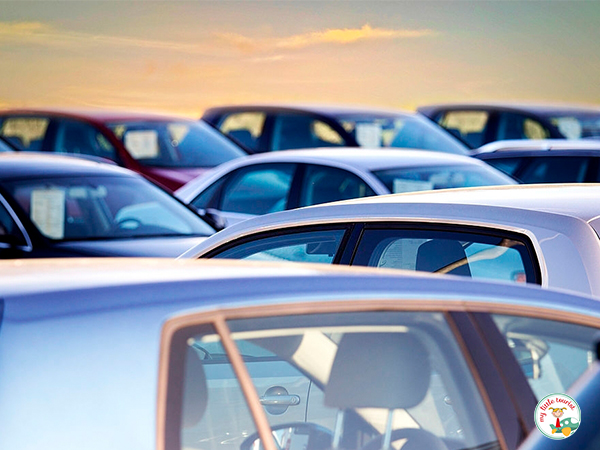 You can hire a taxi for a day, there are many car rental companies which provide reliable and affordable travel. In fact, the hotel where you stay can arrange one for you.

You can take an auto but they charge 50% more at night. There are government buses too.

As you travel around the city, just carry a bottle of water. You need not worry about carrying food for your kids because the city has many hygienic eating joints at every nook and corner.

How to reach Mysore: 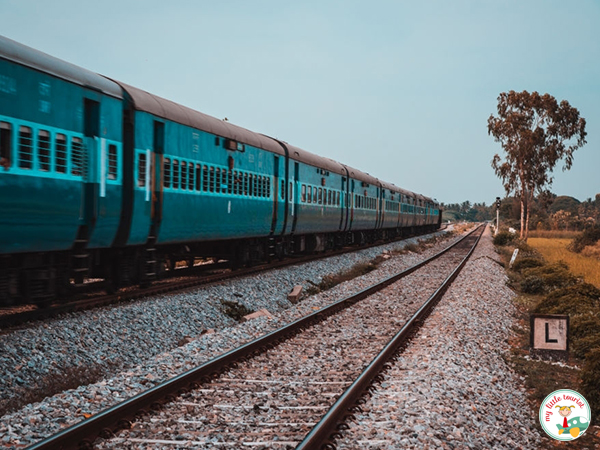 By Air: The nearest airport is Bangalore international airport. Mysore to Bangalore distance is180 km and it takes about 3.5 hours by road.

By Train: Mysore is well connected by trains to all the major cities in the country. The railway station is just 2 km from the center of the city. There are many express trains from Bangalore city which take 3 hrs to reach Mysore.

By Bus: Many government and private buses ply between Mysore and most of the major cities in India. 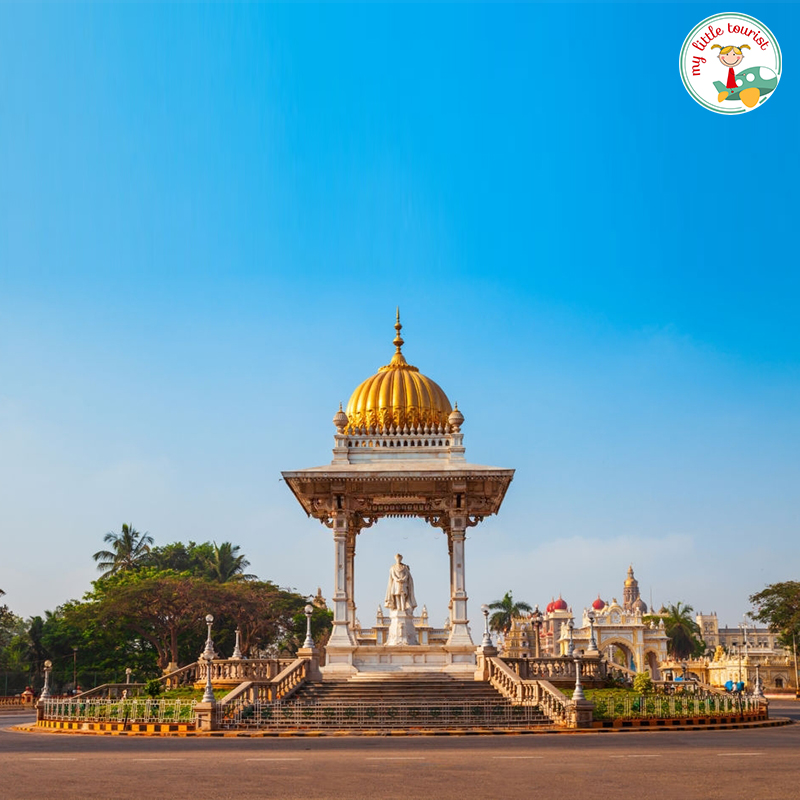 All said and done, there are very few cities like Mysore – a city which is an amalgamation of royal heritage and culture, gardens and galleries, silk and sandalwood, lip-smacking food, and so much more! 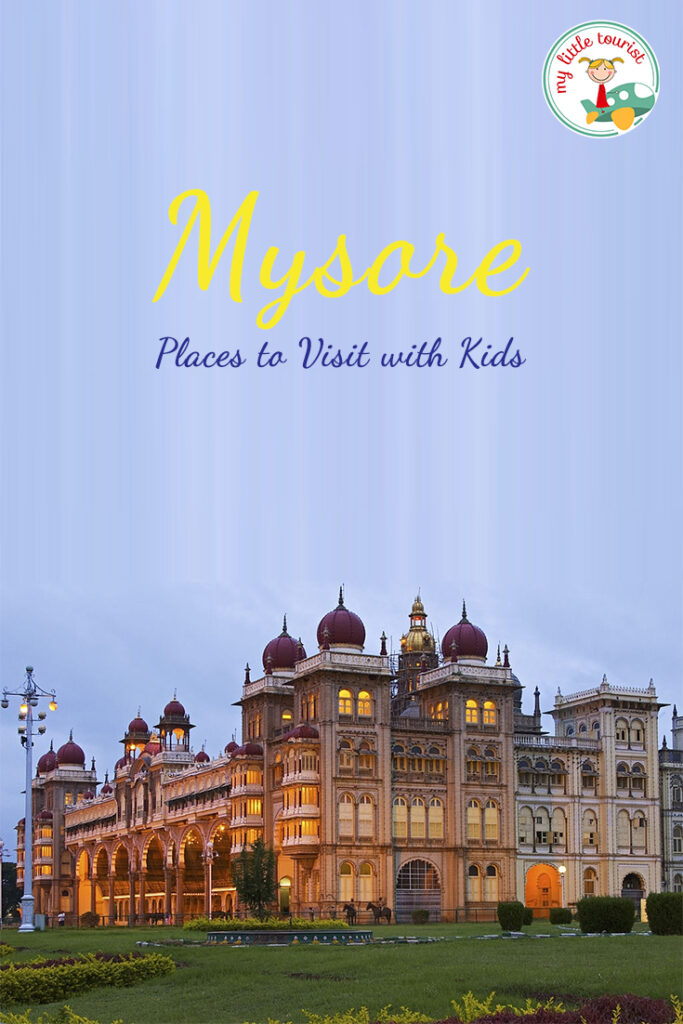